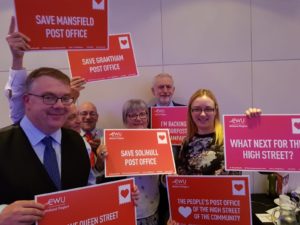 Our members working in Crown Offices have received the devastating news that 74 Crowns will be franchised to WHSmith.  This announcement coincided with the WHSmith annual financial results announced to the Stock Exchange.

The further link up with WHSmith will result in the loss of approximately 700 jobs, although this could be greater depending on the size of the Crowns.  To put this into context, 74 Crowns equates to roughly 30% of the current Crown network, so this is a massive attack on our members’ jobs.

Within the Midlands the impacted Crowns are Grantham, Mansfield, Nottingham (Queen Street) and Solihull.

The CWU will be holding a National Campaign Day on the 1st December to make the public aware of the decline of their service in the local community, in the Midlands we will be outside the following Post Offices

We will also be holding a public meeting in Solihull at the Royal British Legion Club, 18 Union Rd, B91 3DH  on the 7th December at 6pm.