CWU Midlands People’s Post event was declared “a fantastic success,” by a tired but still enthusiastic regional secretary Kate Hudson, after a busy day of protests, rallies and even a song and dance session in Birmingham city centre.

Launched in central London last July with a giant banner over the River Thames and a demonstration on Parliament Green, People’s Post followed up with a monster rally in Manchester which hi-jacked the city from conferencing Conservatives. 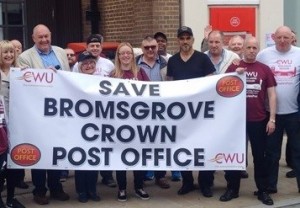 And it was over to the union’s Midlands Region for Stage Three of the nationwide campaign, which opened up with a lively demonstration in the constituency of a senior UK politician.

CWU members from across the region gathered outside the franchise-threatened Crown Post Office in Bromsgrove, where members of the public were asked to sign petitions against the plans to hand the facility over to a private retailer.

Addressing shoppers and passers-by, general secretary Dave Ward said: “We’re here today to support the people working in this post office and the service they provide to the public. The politician who can do something about this is your own MP Sajid Javid.

There was a cheer for Bromsgrove Post Office workers Annette Brooks, Debbie Davies and Linda Connellan as they emerged from the building to join the protest and local residents queued to sign their names to the petition, which, according to Kate Hudson, received “hundreds of signatures in just a couple of hours.

“It was very important to start our People’s Post event here in Sajid Javid’s constituency because he’s the Secretary of State for Business, Innovation and Skills,” she explained.

“It’s been a really positive response from people here – and many thanks to all our CWU campaign volunteers for turning out. The fight to try to save this Crown Office will continue.”

In the afternoon, Birmingham’s Bullring Shopping Centre was treated to a “dance flashmob” – all in CWU T-shirts and, appropriately, dancing to the Motown classic Please Mr Postman.

“It was brilliant,” enthused Kate. “The dance flashmob took people totally by surprise, but they seemed to really enjoy it.

“We also timed it so that we brought up our eight-foot high CWU balloons behind the dancers just as they began.”

After the fun in the city centre – and a conversation with some perplexed shopping centre security staff – Kate and the campaign team headed off to Victoria Square, where preparations were under way for the early evening event.

Continuing with the musical theme, campaigners were then entertained by Sean Reeves – whose father is a CWU member in Birmingham – performing accoustic versions of contemporary tunes, and then a string of 1980s Jam and Madness tunes from Midlands bandThe Score – who are led by Nottingham Mail Centre worker and CWU member Chris Kerry. 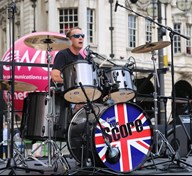 As the square started to fill, Leicester singer-songwriter Grace Petrie took to the stage to play a selection of her own protest songs, including I do not Have the Power to Cause a Flood andYou Pay Peanuts you get Monkeys.

General secretary Dave Ward gave a stirring speech to the large crowd, and urged everyone present to join the growing movement to “build a new political settlement.”

The privatisation of Royal Mail had been “a disgrace” he continued, pointing out that, under public ownership, the profits from this business could be used for investment in the service for the good of all.

In the wider world of work, there had never been a time when workers had been under more pressure to work harder and cheaper, the general secretary pointed out and insisted: “We’ve got to change that.”

Britain needed a new government, Dave said, and called on the audience to be part of achieving this by joining a union and supporting the People’s Assembly.

“We want a new deal for workers and a progressive housing policy and we will elect Jeremy Corbyn as the next Prime Minister,” he concluded.

Labour’s deputy leader, Tom Watson, is also a local MP (West Bromwich East) and his speech included a firm pledge that under the next Labour government “things will be different.

“We will give workers a genuine living wage, end models of insecure employment, defend postal services and work with the CWU to bring it back into public hands,” he vowed.

Acting DGSP Ray Ellis was the last of the speakers and he made a powerful speech explaining the many challenges being faced by Post Office workers, whose pension rights are currently under attack by the employer, as well as the threats to their jobs from franchising, closures, and the substantial job losses looming within the cash handling part of the business.

Ray said that a major contribution to this crisis was the forthcoming withdrawal of government subsidy from the Post Office and he promised that “the whole of the CWU will stand behind our Post Office members.”

The statutory regulator for Royal Mail and the wider postal and communications industry, Ofcom, came in for strong criticism from the acting DGSP, who accused the watchdog of “undermining the universal service in the name of competition.”

Ofcom is a “regulatory body that believes in neo-liberalism and a small state, but it’s a vastly bloated, parasitic agency that performs no useful purpose,” Ray said, and slammed the organisation for seeking to “drive down” postal workers’ pay, terms and conditions. 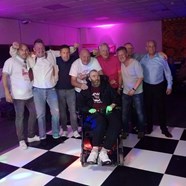